Upon returning to California after almost seven years living in Israel, navigating the waters of change and the tides of time.

Everybody's Got Something, Nelson Mandela Included

While discussing an otherwise perfectly pleasant and wonderful mutual friend, someone said: "If she would only..." (fill in the blank) and I replied: "It's her Something. Everybody's got Something."

Today's Something on display in the world of Social Media is a world view that elevates a complete, unquestioning and limitless loyalty to everything remotely and/or specifically Israeli above ALL other values.

It's some people's Something. Everyone's got Something. This one just hits too close to home.

Nelson Mandela died yesterday, and the general reaction on Facebook was divided into two camps - those who expressed grief, and those who judged the grief of others as wrongful and misinformed.

The latter group brought both images and quotations of Nelson Mandela's support for the PLO and a photo-opp with Yasser Arafat (y'mach s'hmo) as proof-texts for their stance. A summary of the worst of the charges against Nelson Mandela's relationship with terrorists can be found at this link (click on it if you want to read).

I examined the charges and I can't disagree with the documented fact that Nelson Mandela did in fact meet with a number of world leaders who I personally wouldn't invite to my Shabbos table - people like Fidel Castro, Desmond Tutu, Arafat (y"s), and that those same leaders and the propaganda artists whose job it was/is to create symbolic alliances to strengthen their cause didn't hesitate to use Mandela's near-martyr status (deserving as it was) to bolster their own prestige. His presence both enobled and legitimized those who deserved neither nobility nor legitimization. Amongst other harms done - the truly illegitimate co-opting of the word "Apartheid" into the vocabulary of the PLO was a direct result of these associations.

With that being said (and I do believe it needs to be said, and there, I said it!) - Nelson Mandela WAS BIGGER THAN THAT.

Bigger than his political allies, who burned for revenge and hoped he would call for violence upon his release from prison.
.
Bigger than those who hated and feared him, knowing when he emerged from prison he might have seized the opportunity to call down the hellfire of genocide upon the White population of an entire Continent, if not beyond.

A single man. A single moment in time. 27 years in prison at the hand of a racist oppressor. Millions of followers who, with only a word, would with rocks and knives and guns and their bare hands have torn to bits those whose skin color had dominated and oppressed every aspect of their lives for generations.

So, yes, everybody's got SOMETHING. Nelson Mandela's "Something" was a political association with the PLO, the sworn enemy of Israel. But his OTHER "Something" was the fact that he saved MILLIONS OF LIVES WORLD-WIDE, many of them JEWISH, when he emerged from 27 years in prison preaching peace instead of war, looking for cooperation instead of feeding conflict.

IT COULD HAVE GONE THE OTHER WAY. AND IT DIDN'T.

That's why Nelson Mandela's "Something" is, in my humble opinion, distasteful to me both as a Jew and an Israeli, but overlookable because of EVERYTHING ELSE. 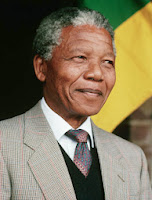 Just the way I overlook the "Something" in so many people whom I know and love, because EVERYTHING ELSE tips the scales.

Probably just the way others overlook the "Something" in me as well.

Perhaps even this truth about me that might be uncomfortable: Although I do value complete, unquestioning and limitless loyalty to everything remotely and/or specifically Israeli VERY VERY VERY highly, I don't value it EXCLUSIVELY ABOVE ALL things. There's one thing I value above that - it's MY SOMETHING.

My "Something" is I can't stand to be told what to think by other people, and unless I've come to a conclusion for myself and by myself, I refuse to think (and do) something I don't believe in. It's my whole personal integrity thing - very annoying, but so much a part of who I am it can't be disabled, even when it comes to other things I hold dear, as dear as I hold my own life.

Everybody's got SOMETHING. What's your Something?
Posted by Lorelai Kude at 9:55 AM

Newer Post Older Post Home
Subscribe to: Post Comments (Atom)
In which I return to California after almost 7 years in Israel, because when the heart is in one place and the soul is in another, both the emotions and the body suffer.
Welcome to the chronicle of this phase of the long, strange, trippy story of my life ...

It's hard to follow the narrative without a context, and admittedly there are missing links, gaps and mysterious omissions. Eventually all will be sorted out. But meanwhile...

My early years in Israel JERUSALICIOUS